A boutique hotel will open in the Arts Centre of Christchurch in 2022.

A $29 million luxury hotel at Christchurch’s Arts Centre will rival some of the best boutique hotels in the world, its new operator says.  A 33-room art-themed hotel will open in the former physics and biology buildings and on the ground floor of the Observatory Tower building in the south quad, in early 2022.

Sarin Investments, a New Zealand-based family hotel company that owns and manages hotels for brands including Hilton and Intercontinental, will manage the hotel and a 350-person events space in the former Court Theatre building. 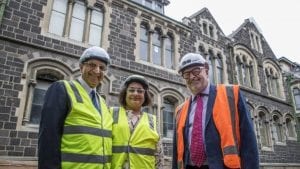 Sarin Investments owners Raman and Anu Sarin with Arts Centre chief executive Philip Aldridge, outside the physics block, which will open as a boutique hotel in 2022.

Sarin Investments chairman Raman Sarin said the hotel at the Arts Centre would be one of the world’s leading boutique hotels.

Room prices had yet to be determined, given the hotel would not open until 2022, but would possibly be about $300 a night, Sarin said. 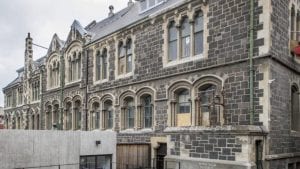 The Arts Centre’s neo-gothic architecture will likely be a drawcard for people wanting to stay at a new boutique hotel opening in the Arts Centre in 2022.

The company has other interests in Christchurch. It owns a site on Gloucester St between Press House and Cathedral Junction, where the company plans to build a hotel. Sarin will also operate a hotel in a mid-20th century office building at 159 Manchester St, which is being developed by Box 112.

Arts Centre chief executive Philip Aldridge said the hotel would reinvigorate the Arts Centre and bring another dynamic aspect to the centre.

His vision was to create a centre of the arts and a creativity hub. 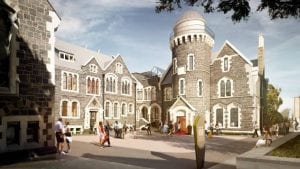 A 33-room hotel will open at the Arts Centre in Christchurch in 2022.

“Visitors could come to the Arts Centre for a retreat, attend a performance, be part of a workshop, go to a movie, dine and stay the night.”

The centre’s primary goal was to foster the arts, culture, education and creative industries, but to achieve that, the centre must generate reliable income through businesses, including the hotel, Aldridge said.

The events centre would be a multi-purpose space that could host exhibitions, weddings, and conferences. 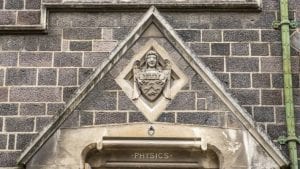 The former physics building at the Arts Centre will become a boutique hotel to rival others across the world.

Christchurch-based designer Jessica Close is in charge of the hotel’s interior design. Each room will be different and the plan is to showcase local talent. Bold contemporary art, fabric and furniture will be used throughout, Close said.

The Arts Centre, which is owned and managed by an independent charitable trust, is undergoing a $290m restoration programme after it was severely damaged in the 2011 earthquakes.

Eleven of the 23 buildings are already restored and open to the public and most of the remaining buildings will be completed within the next three to four years. However, the Arts Centre is still $30m short of what is needed to complete the full restoration. It is raising funds to meet the gap.